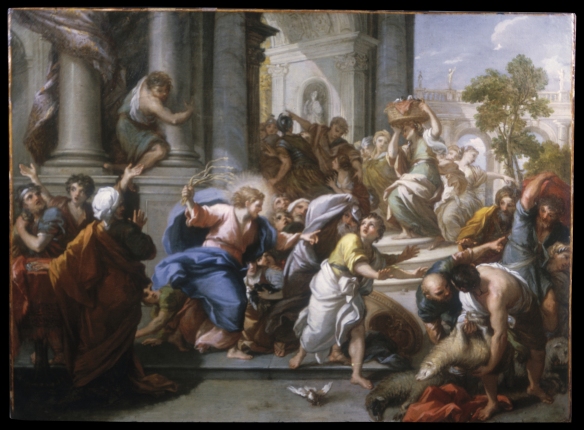 What began on Palm Sunday with high expectations and a parade of palms, has now led to the cleansing of the Temple and Jesus’ authority questioned.  The mob has turned quickly.  Jesus fuels the anger of the people, and we know that anger turns on him quickly.  In Mark 11, Jesus cleanses the temple.  Today he tells the parable of the wicked tenants.  It irritates more people.

“What will the owner of the vineyard do?  He will come and destroy the tenants and give the vineyard to others.”

Rarely are Jesus’ parables told in such an allegorical fashion.  It is clear he is recalling the similar vineyards that the prophets Jeremiah, Ezekiel and Hosea speak of, identifying God’s vineyard and wayward Israel.  They treated the prophets badly.  Why not God’s son?

It could be argued that with the cleansing of the temple, Jesus infuriated the Sadducees.  Now with this parable, and the violent rejection of his words, it is clear the Pharisees and other teachers of the law would also be indicted.  Now they turn.

Each group in turn, Jesus points the finger and the growing escalation of discontent with Jesus ministry – including the Roman officials – leads to plots to kill him.  Thus is the Holy Week narrative.

When have you been disappointed or irritated with God?  What do you do with those feelings?  I would hope that Holy Week, among other things, helps us see that it is OK to come to God 100% real.  God can take it.  It also helps us move forward in faith, with clean and honest hearts about our joys, disappointments, or angers with God.

We follow a God who does not turn on the ones he loves.  He comes back and says “Father, forgive them for they know not what they do.”  The story marches on.