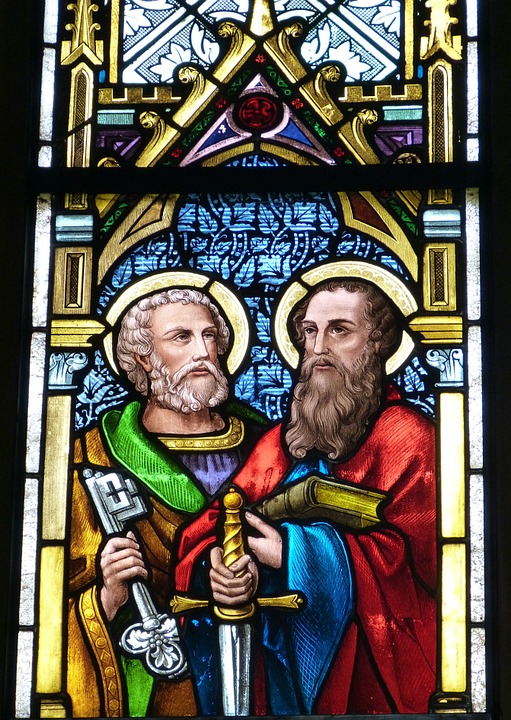 Breaking News: Paul was a Presbyterian!  You heard it right here on Morning Reflections. Or so it seems from the way he talks today in Romans.  He carves out what I see as a doctrine of election, expanding on God’s freedom to Gentiles as well as Jews.  Including good predestination talk like “prepared beforehand”.

This was the first major fight of the Church.  No, it wasn’t over the ordination of women, or gay marriage.  It was: Were Gentiles going to be allowed to become Christians, or would they have to become Jews first, just as Jesus was a Jew?  Paul talks about God as a potter: “Has the potter no right over the clay, to make out of the same lump one object for special use and another for ordinary use?”

He is not arguing that the Jews are just ordinary lumps (HA!) and is questioning whether Gentiles have been made as special lumps too.  He backs up his arguments with good solid Old Testament prophecies and fulfillments.

One of the major shifts in New Testament thought is this doctrine of election.  It is being completely redrawn.  Does God have Chosen People?  Well yes, but the rules are completely different – not only in how they are selected, but who is in charge of that.

And this is why many of the Jewish Christians were objecting to this at the time, because it meant a loss of power and control.  Isn’t this always the way?  Self-interest trumps God’s grace.  “Oh, God can be gracious, but I wanna still be in charge” – Right?

Now God’s Spirit is on the loose.  And the good news is spreading in a chaotic fashion, and no one seems to be in charge.  As it turns out, that ends up being a good thing.

There is a wonderful book that I read many years ago.  It had such an impact on me, it is quoted a number of times near the beginning of my dissertation, as I lay out my argument for collaborative ministry.  The book is entitled The Starfish and the Spider: The Unstoppable Power of Leaderless Organizations.  Its main premise is that organizations that are decentralized often have unstoppable strength and power.  The internet is a good example of a decentralized organization.  There is no CEO of the internet.  And yet it has enormous power.  Self-organizing systems, which may seem like chaos, often have a complex web of organizational patterning that works.

The early church was a good example of an self-organizing system that was decentralized.  We follow Jesus Christ as our Lord and Savior.  He is the leader of the Church.  But good luck issuing a subpoena to him to testify to the Senate.  Furthermore, everyone has a different idea what the Lord is telling us to do.  The Church is about as decentralized as one can be.  And yet that is its strength, isn’t it?  Try snuffing out the Church.  Good luck.  Oh, you might have luck getting a couple churches to close, or even banning it in a country or two, but it will just crop up somewhere else with new leaders.

The decentralization was being built into the system.  And Paul was arguing that however chaotic it looked, that it is God’s prerogative to do just that.  If the potter wants to form this creature of the Church like this, then it is God’s right.

And how powerful we can be, armed with the good news of the grace at hand.