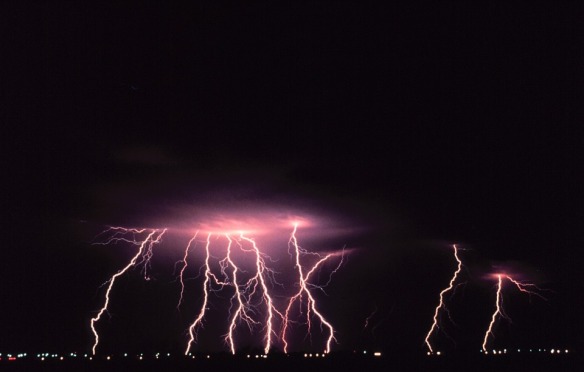 Luke retells the story of Jesus calming the storm and the Sea of Galilee today.  It seems ironically appropriate after the wave of bizarre weather events of the last few weeks: from straight winds that damaged our West Transept Window, to hail storms, to tornadoes (last night one in Elk City), to the occasional earthquake.

For people of that era, the sea had special significance.  While it provided food and life, it was also seen as something that separated us from God.  In the world view of the time, not only was the earth flat, but it was surrounded above, below, and beyond by the chaotic waters, much like a large bubble of air in an infinite sea of water.  The sea was not just an ocean, but a vast expanse of chaos, including the firmament of the sea which dwelt above.  The heavens were beyond this, and while God dwelt in the temple, God was also present in the heavens above.

This story is not merely Jesus calming the storm.  For Jesus to command the wind and the sea meant to control the power of separation from God.  Jesus was bringing the chaos under control, a foreshadowing of the coming kingdom, a kingdom in which God was closer and more accessible.

Revelation puts this concept in these terms, “And the sea shall be no more.” (Interestingly enough, to indicate that the sea will be no more ties in to that ancient understanding of the firmament as well – for if the sea is a vast expanse of chaos, which is above and below us, and it disappears, then that which separates us from God is no more.  Heaven is here on earth too).

The chaos of our recent weather is a bit different.  Here in Oklahoma it is common for tornado sirens  to blare, wall clouds to approach, and hail, wind, and thunder coming weekly.  But I don’t remember having to dodge strong winds DAILY and worry about large hail and earthquakes too.  I am beginning to wonder if the rapture is coming.  In the midst of the storms, God always provides us with the gift of each other, which Oklahomans do so well – coming together.

God is present in all that we do.  When we look beyond the text, Jesus does not merely heal a couple paralytics or diseases – he breaks the barriers of the chaotic realm on the physical universe itself, which separates and deceives.

God now is among us.  God is not bound by our physical reality, and yet has become a part of it.  The separation with God has been shown to be a false separation in Christ Jesus.  And that is some good news amidst the impending storms this week, and also for the daily grind of life.