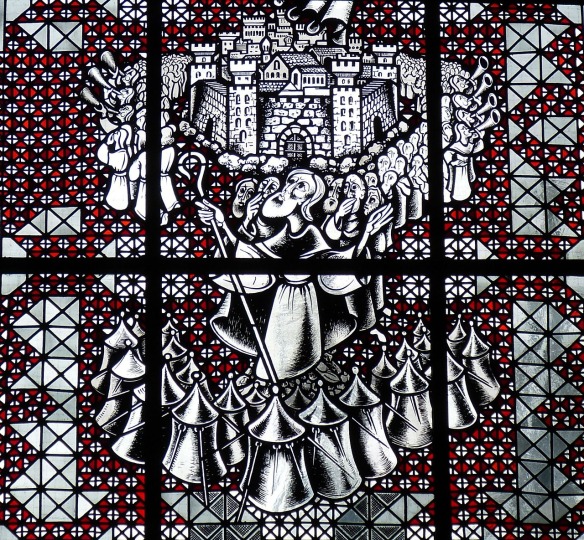 Our OT lesson today reveals that even amidst trickery and denials, God’s will prevails.  OK, double trick, if you want to look at it simply and not for the deeper God’s truth that is revealed.

If you remember the story, the Gibeonites save themselves through trickery, wearing worn-out sacks, clothes, and sandals, and convinced the Israelites they were from a far away country.  They live amongst the Israelites and avoid disaster.

It is a bizarre story that reminds me of the stories told to me a while back when I was in Jericho.  There I stood at some archaeological ruins, looking at the excavations that go back 1000s of years, and seeing the walls of Jericho from Joshua’s time which obviously not fallen, wondering about the truth of scripture.  Did the Israelites really win these great battles, destroy villages, and conquer the native people?

Later in my studies I came to realize that “victory” in the biblical texts is often meant with hyperbole, irony, or metaphor.  For Joshua and the gang, the “victory” the Israelites achieved was not always by these fantastical stories of destruction, but often by “breeding out the enemy”.  What better way to disrupt the native Canaanite people than by love?  There is the irony.

Don’t fall into their trap!

When we discover the archaeological truth, we come to discover and unlock the deep biblical truth of God’s love.  Let go of your intellectual disconnect!  Shelve your training in grade school in the scientific method and look for truth in the story!  When you do, the reality of God’s truth is revealed:  Either way the facts fall, this was becoming the Promised Land for the Israelites.  People were finding a home.  Love won the day!  All were living in harmony.

I love how rich and deep in meaning Scripture is.  No wonder people have been reading it for centuries.  If it was blah, we would have been bored with it millennia ago – but instead it is complex, with twists and turns almost beyond comprehension.

Don’t shy away from the seeming “untruths” of scripture.  Embrace them, for they are with a little study, in fact, great and profound truths of God’s unfailing love.