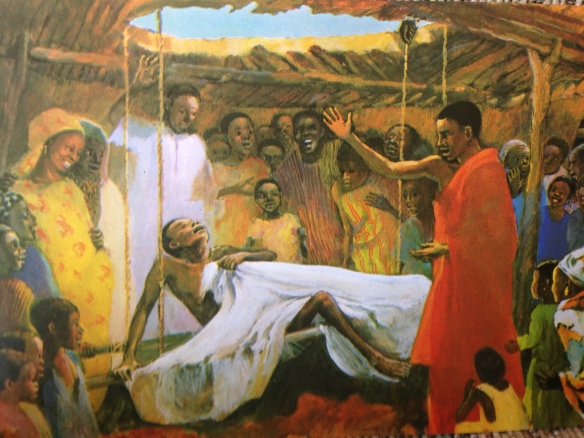 Today Luke reminds us of the familiar story of the healing of the paralytic.  His friends bring him to the house, but finding no way in because of the crowd, they lower him in through the roof.  When Jesus sees their faith, he declares, “Friend, your sins are forgiven.”

Of course most of the story focuses on the scandal of Jesus forgiving sins.  The scribes know full well that only God forgives sins, so to them this sounds like blasphemy.  Jesus identifies himself as the Son of Man, which is quite a title – an Old Testament term which means that at the very least he is a great prophet, but more likely the end-time judge who arrives on the clouds of heaven.  “Who does this guy think he is?” the scribes are asking themselves.

And then Jesus does something miraculous.  He steps in and says, “Which is easier…to say ‘your sins are forgiven,’ or to say ‘Stand up and walk.’”  So he does it.  And the man takes up his mat and goes home.  This is all too much for the crowd.  Strange things.

What fascinates me the most from this passage is not the healing, but Jesus’ initial assertion that “Your sins are forgiven.”   What sins?  The sin of busting this guy’s roof?  Jesus may have been referring to the understanding of sin of the time, which held that his physical affliction had something to do with his sins of the past.

At other times in the gospels, Jesus challenges even this idea.  He talks about sin in a much more general way, often leaving the crowd wondering if these were the “sins of the mother and father.”  At other times, Jesus understands sin as more as a condition, one that we all suffer from.

But here he does not even ask this paralyzed man what he did.  Sin is just something that exists in all.  The overwhelming part of this story is that he focuses not on the past, but the present.  No matter what he did or who he is, the fact is, “Your sins are forgiven.”

This is a powerful statement – come to Jesus and your sins are forgiven.  And that goes for all of us.

This story isn’t about a paralytic that goes through someone’s roof – it is about every person reading these words, and the power of action and belief.

It is about an extraordinary presence that has come into our midst – the very presence of God – to heal and forgive each and every one of us.  Knowing the political and cultural climate of today, that sounds like a pretty good place to start.